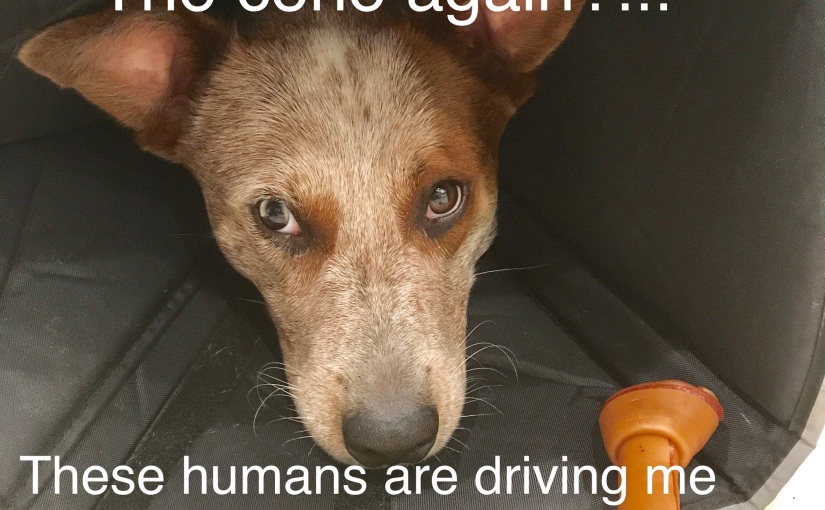 We cut our sweet rescue dog’s balls off last Thursday.

We didn’t actually do the cutting ourselves, but after weeks of gaining Alfie’s trust and promising him we would never hurt him, we took him to a place he was barely familiar with, let them drag him to another room away from us.  Then he woke up in a cage sore and probably thinking he would never see us again.

“He’s very nervous,” the vet tech informed us when we came to pick him up.  “Yes, we are a nervous household,” I replied.

I hate hurting something so innocent.  It goes against everything I am, but it’s just something you have to do sometimes.  Hopefully that is the last horrible thing I will have to do to poor Alfie until he’s old and I have to kill him.

I’m depressed.   My therapist says that most men are depressed the day after they cut their dog’s balls off, and there is something to that, but I don’t think that is all this is.

I hate for Alfie to think I am anything but kind to him.    Kindness.  It’s something I write about a lot in this blog.   Lately, I fear kindness is losing.

I have lost the ability to have any understanding of how people are not alarmed by the horribleness of what is happening in this country.   It feels absolutely hopeless and impossible to get some people to understand what is going on.

People are defending putting children in cages because those awful “others” are coming in here illegally.   I have a hard time believing their lives are affected in any way by the immigrant situation.  I don’t believe immigrants are taking their jobs or killing or raping them, but they seem to believe these people should be punished in the most inhumane way possible.

These are the people who vote on the abortion issue alone.  They care about the fetus but not about suffering children of the world.  Why?

The most puzzling to me are the churchgoers who feel this way.  Not all of them do, of course, but there are way too many who defend this angry, belittlingly, administration that blatantly lies in ways that can be proved. Where the hell did Jesus say to be strong and turn your back on the least fortunate?

There are the people who support children in cages in one post on Facebook while showing pictures of their own kids happy in the next post.

They mock me and call me a snowflake because I am deeply troubled about the lack of compassion I see.

They seem to think America is great because we are sealing our borders even though we want to kill each other and ourselves inside those very borders more and more.

I think understand why the suicide rate is going up.  We are surrounded by intolerance and it is addictive–even if it is directed towards ourselves.

I don’t know how to go home and face relatives who think this guy is good.  I always try to see the other side but I’m exhausted.

I don’t know how to get people to wake up.  I honestly in every cell in my body don’t see why it is not obvious to everyone what is happening.

I can understand now but I wish I couldn’t.

And now a new Supreme Court Justice is to be picked and I start to wonder if one day I will have my right to be married taken away.

I think about leaving this country that others are desperately trying to get in but where would I go and what would I do?  Can’t the people who love Trump start their own angry country called Trumpy or Trumpada or Trumpland and seal their borders and do whatever they want?

That isn’t probably going to happen so what do I do?

Last week, my husband Saul and I were fretting past the point of no return about whether our dogs suture was healing and were taking daily pictures of his penis which I worry will be found on our phones one day and we will be arrested.  Saul misheard something I said.  I said caring but he thought I said carror.

“That is the perfect word for what we are going through,” Saul said.  “Carror—Terror from caring too much.”

That is what me and many people I know are going through on a national scale.  We care about human dignity, and complex thinking, and personal dignity.   And we are terrified that  it is slipping away sometimes slowly and sometimes shockingly quickly.

Someone told me Hillary lost because it was all moving too fast.  “The gay marriage and the transgender bathroom…it was too much too soon.”  But is all moving at just the right pace for babies in cages?

So, I am to take a cue from our first lady’s jacket and I’m going to care less.

Maybe hat will leave room in my heart to care more for the helpless and vulnerable.

The first night Alife came home from the vet he was scared and in pain and disoriented from the anesthesia.   I slept next to him in a sleeping bag on the kitchen floor all night and soothed him when he woke up crying.  “It’s all right to afraid,” I would whisper to him.   “It’s the middle of the night.  It’s the worst it will be.  Morning will be here before you know it.”  Alfie couldn’t see it so I had to see it for him.

Right now,  I don’t know if the night I feel I am in will ever end.   But I can’t and won’t let my carror paralyze me.   I will fight and I will care as passionately as I am able and I will hopefully see the glimmer of a new day.  What the hell else can I do?

ABOUT THE AUTHOR – KEITH HOFFMAN has picture of his dog’s healing penis available upon request.