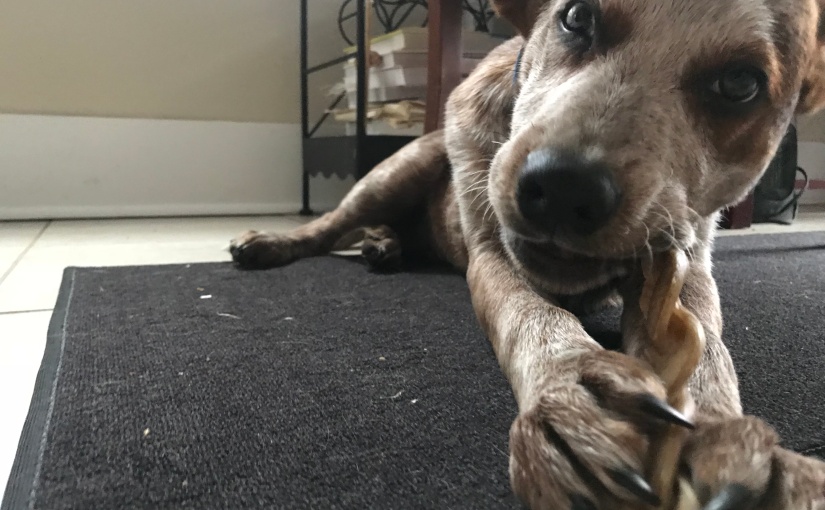 My husband Saul and I got a puppy a week ago Saturday and he has totally taken over our lives.

Now I know some of you are saying, “Keith!  That’s great‼  You went on and on ad infinitum in one of your blogs about how much you wanted a puppy and how Saul kept you from getting one.  And now you have one!  You must be so happy!‼”

Those of you who are saying that are on my nerves right now.

Yes, I wanted a puppy and, yes, I knew it would be hard at first to make the big adjustment, but things don’t get less hard even if you know beforehand that they are going to be hard.   It just lacks the element of surprise.

As Dickens wrote, “It was the best times.  It was the worst of times.”   Getting a puppy and the French Revolution are not as dissimilar as one might think.

This disruption’s…I mean this puppy’s….name is Alfie.  We didn’t come up with that name.  His foster family did, but we like it.  If it was a girl, I would have preferred Lulu or Elaine, but Alfie decided he was the one who was going to come into our lives.  The only problem with this name is people are going to say to us, “What’s it all about, Alfie?”  for the next 15 years. And when they do, even though we will have heard it a million times before, they will think they are being clever and we will have to politely laugh.   I already have people saying, “Did you find him yet?” when I say I produce Finding Bigfoot, and Saul has people saying, “Better Call Saul” to him constantly.   We both ALWAYS have people asking, “Are you two brothers??”   So this just one more burden we will have to bear.

It all started three Saturdays ago.   We had decided during our trip to LA, we were ready for a puppy—or maybe I just finally broke Saul’s spirit.  A neighbor told us about rescue puppies up for adoption at our local pet store so we decided to check it out.   As we drove there, I joked about coming home that day with a puppy.   When we got out of the car, Saul looked at me very seriously and said,  “I see you are getting crazy about this and I want you to be clear that we are only looking.  We are not getting attached to any dog.”

I hated the word choice of crazy but I nodded demurely.  I also hate telling a story with a predictable ending, but I think we all know how this is one is going to end

Before the pet store door was even shut behind him, Saul was in love with Alife and had him on his lap.   He practically begged the adoption woman to let us have him.  Alfie is an Australian sheep herder and Pointer mix.  He is also known as a healer.   I like that he is a healer.  Who couldn’t use a little healing?

The adoption woman played it close to the vest and told us there were others who wanted Alfie.  She dismissively said they would call us after reviewing our application.

I got the call from the adoption agency the next day and was grilled for almost an hour.  I felt like Hillary Clinton during the Benghazi hearings.   I tried to keep my composure and answer each question–even the gotcha questions–clearly and honestly.

The lady asking the questions was nice, though but she knew she had what we wanted.  Here is an example of her yielding her considerable power:

Adoption Lady: “Maybe you could do an Animal Planet show about our organization.”

Adoption Lady:  Maybe your husband could paint some dogs for us.

I said yes but I really wanted to scream, “JUST GIVE ME THAT FUCKING PUPPY, LADY!”

We picked Alfie up the following Saturday

Look, Alfie is adorable but (and I imagine babies are like this?) having a new life in the house is very jarring the first few days.  Our friend Marjorie said a new puppy is like a two-year-old running around the house with scissors.

Alfie doesn’t have a clue what to do to keep himself alive. Alfie would be a terrible stray.  He is smart but he is not street smart.  He would live about 10 minutes on his own.

And then there are the two cats.  The cats were Saul’s biggest hurdle to getting a dog.  I explained to him that they would not be happy the first few days but they would adjust.  Saul seemed to hear me, but when they freaked out on Day 1 and moved themselves to the basement.   He worried they would never come upstairs again.

“Of course, they will come back upstairs,” I said but was secretly worried myself.

Finn and I are just a tiny bit more easygoing.  He came upstairs pretty quickly and made strides adjusting to Alfie the first day.  Neither Finn nor I like sudden change but we tend to be optimistic and adjust once we get over the first hump.   Finn does like to attempt to escape over the fence  to the neighbor’s yard quite a lot though.  For all our seeming easy-goingness, Finn and I  still have a few commitment issues.  We are ready to abandon before we are abandoned.  Or maybe we just like it when people notice we are gone and come after us.

When Luke and Saul get overwhelmed they retreat to the farthest and darkest reaches of the house (Luke planted himself up on top of the air conditioning ducts in the basement) and alarm everyone around them.  Luke carried his feather toy downstairs with him.  Even though he was apoplectic with worry, he wasn’t going to deny himself the simple pleasure of a cat toy.  In Saul’s case, he would have shut himself in the bedroom with Murder She Wrote downloaded on his computer and a bowl of chocolate Halo Top ice cream.

But a week later, all five of us have made great progress.  The cats are upstairs and, although certainly not in love with Alfie, have come to tolerate him being alive.

And there are a few good things about Alfie.

Saul and I like to each name three things we are grateful for each morning so I will end today’s blog by listing three great things about Alfie.

And that is a good thing.

And a healing thing.

ABOUT THE AUTHOR:   KEITH HOFFMAN HAS DOGGIE TREATS IN HIS POCKET AND IS EXCITED TO SEE YOU 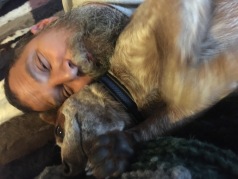