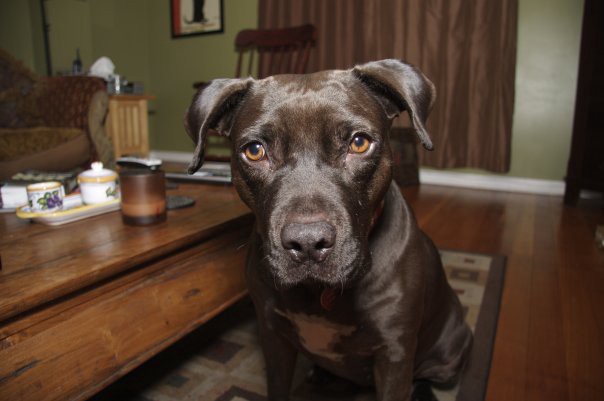 You can’t always choose your angels

Sasha literally showed up on my doorstep one morning.

I was living in LA, rushing to work when I opened my front door to find a weird-looking, weather-beaten dog staring up at me. I quickly slammed the door between us. It was a pit bull, for God’s sake! I opened the door a tiny bit to take a closer look through the crack. She seemed pretty harmless. Her face was scarred, and she looked like she had recently had puppies.

Pit bulls in the section of LA I lived in often came from hard lives, and it was pretty clear she was not well taken care of. I knew if I called animal control her breed would be put down immediately, and I would be condemning her to death. But I was definitely not looking for a dog at that time of my life, so I decided to feed her some cereal and hope she would wander off and not be my problem anymore.

I thought about her all day at work until I finally broke down and called a friend who always drove past my house early in the afternoon on his way home from work. “If she’s is still on my porch, can you let her inside?” I asked. “The key’s under the mat.”

She was fast asleep in my bedroom when I got home. I eventually named her Sasha and told myself that she had chosen me. Later, I found out from a neighbor that she had hung out on every porch on the block and got to mine last. Apparently, I wasn’t so special. I was just the poor sap that took her in.

Whatever the reason, Sasha was in my life to stay.

How to heal during walks

As Sasha’s life got dramatically better, mine took an equally dramatic turn for the worse. My sister and mom, who were the people I was closest to in my life, died only a few months apart. I felt leaden with double grief, and didn’t want to do anything but lie in bed under layers of blankets in my darkened bedroom.

But through the hardest days, I knew I still had to be a good dad to this kooky creature I had rescued from the street. Making sure she was fed and felt loved kept me from going completely off the rails. I began a habit of taking her on hours-long walks late at night when it was dark, and no one could see me crying. She became the silent witness to my grief, and never said dumb things to try to make me feel better. She just let me walk and weep.

Every night, we would stroll by a street lamp that would shut off just as we were underneath it. I became convinced it was my sister saying hi. Sasha didn’t laugh at me for this, and if she rolled her eyes I didn’t see it.

I drove across country from LA to New York City for a new job and new life, and Sasha was at my side.

She was a pretty good traveling companion, except when she saw other dogs — then she would become some insane she-devil barking ferociously and jumping all over my little Mini Cooper so much I thought it would break apart. In those moments, I learned to go into my special mental safe zone and focus only on staying on the road until she settled down. When we got stuck in a traffic jam near Phoenix behind a pick-up with a large German Shepherd in back, my car shook so much I was waiting for it to fly off its axles.

Staying in motels had its own challenges. First I had to find places that accepted pets, then I had to be less than forthcoming about exactly what kind of pet.

Explaining she was a pit bull but a friendly one just didn’t seem like the way to go.

But mostly Sasha sat in the front seat and looked at the scenery with me. On the last evening of the drive as we headed into Pennsylvania, Sasha was leaning against me while we shared McDonald’s French fries — one for her then one for me. We had become so close during this huge transition in my life, I would have shared my vanilla shake if she had known how to use a straw.

Sasha’s weakness was her hatred of other dogs. She loved people, but other dogs really bugged the crap out of her.

I’d have to slip her through the back door of the vet because the waiting room drove her mad — there would be dogs coming in the front door or out of waiting room doors in every direction. She thought she was under siege.

After I had her a few years, I foolishly decided to get a puppy thinking if she got to know a dog as it grew up, she wouldn’t perceive it as a threat. 99% of the time she played joyfully with the pup I’d named Rose after my mom’s favorite flower. But that other 1% she’d start a fight without provocation that would destroy my apartment and my nerves. Still, I was determined to make it work and tried for another year.

“No one likes a crazy pit bull,” I’d try to tell Sasha, but she didn’t seem to care. Since I didn’t know her history, I had no idea where this unpredictable behavior sprang from and was becoming increasingly overwhelmed by it.

Finally, when they nearly destroyed my new TV during a ferocious battle, I couldn’t take it anymore. I called my big brother Paul in tears. “I don’t know what to do.” Paul had a lot of space in his home in Indiana and kindly offered to take Rose.

I drove twelve hours from Brooklyn to Seymour, Indiana with Sasha in the front seat and Rose in the back. They were both on tranquilizers, but neither was very calm. When crossing from West Virginia into Ohio, we hit a huge thunderstorm and I couldn’t see more than a half a foot in front of the car. In the midst of it, I noticed Sasha giving Rose an unfriendly side-eye and starting to growl. “Not now,” I muttered. “We will all surely die.” Either my threat or the tranquilizer stopped her from taking it to the next level.

After a week at Paul’s, it was time to go home. The morning of my departure, I led Sasha into my car. I walked back to where Rose was still sleeping in the guest bed and hugged her hard. “I love you so much. But I think this is what is best for you.”

I ran out with tears streaming down my face, got in the car and drove off. Even though I was pretty sure Rose had a happy life ahead of her, I felt like I had failed her. Sasha, on the other hand, gazed contentedly out the window without a care in the world.

“Probably no one else in the world would have kept the difficult dog and given up the cute puppy,” I said to her. “You are one lucky girl.”

Rose thrived and seemed to have been destined to be a farm dog, and things in my apartment in Brooklyn settled down. Still, it took almost a year to fully forgive Sasha. I knew it wasn’t her fault that she had an issue with other dogs, but I still had to find it in my heart to fully love her without reservation again.

A few minutes don’t make up an entire relationship

It helped when I met Saul.

Sasha fell for him even harder than I did. And the feeling from my future husband was mutual. It was a late-in-life romance for Sasha. She was so in love with Saul that when I’d walk in the front door, she’d look over my shoulder to see if he was with me and seemed disappointed if he wasn’t. After Saul moved in, the two of them made me feel like a third wheel. I didn’t care. Sasha had mellowed by this time (although not enough for me to trust her with a puppy) and she just wanted to be coddled, which Saul was more than willing to do.

But late one night, she had trouble breathing. Saul and I stayed up with her and got her to the vet first thing in the morning. She had a terrible and dramatic reaction to a sedative he gave her and went downhill fast. Before I could register what was happening, she was put on a respirator. The vet said there was a chance she could recover but would have to go to another vet hospital for at least overnight. I couldn’t do that. It would be so confusing for her and at her advanced age would give her a few more months of life at the very most. We made the heartbreaking decision to put her to sleep.

The two of us were led to a room in the back of the clinic where Sasha was lying on a table attached to a ventilator, barely alert. I saw her nose immediately start sniffing when we walked in the room and her eyes move in our direction. I hoped she felt safer knowing her two dads were there with her. We held and stroked her and told her how much we loved her as the vet went about his job. It took all my strength and courage not to stop him. I told myself this was the merciful thing to do.

It wasn’t the beautiful, peaceful death I would have wished for Sasha. It reminded me of what my friend Steve, who has had to put three dogs to sleep in his lifetime said: “One felt spiritual, one felt sad, and one was just awful.”

This death was awful.

“I think she felt loved the entire time she was with you,” Saul reassured me. “It’s not about the last few minutes of her life. It’s about a lifetime.”

Saul often reminds me of this. When he’s mad at me, I’ll often ask him how he’d feel if he died suddenly and him being annoyed was my last memory of him. “It will be like Sasha,” he’ll reply. “You’ll know over the long run that I loved you.”

About the Author:  Keith Hoffman lives with his husband Saul in Lambertville New Jersey.  He attributes his happy marriage to the lessons he learned from Sasha.