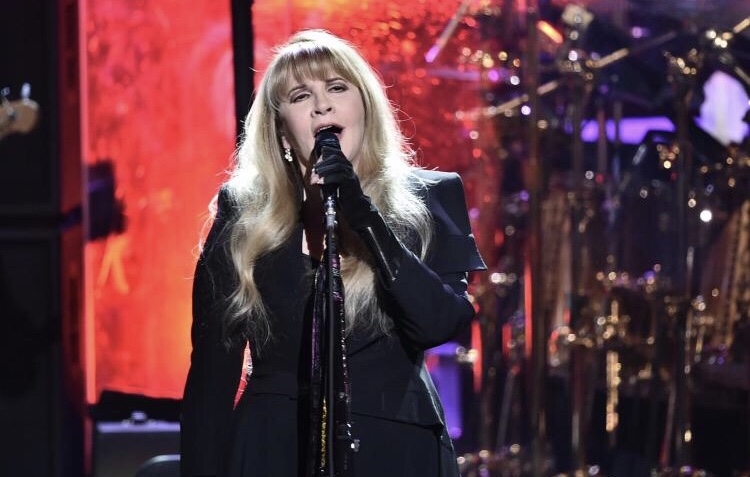 This wasn’t the Fleetwood Mac I had grown up with.   The best-known iteration of the group is the five who recorded the infamous Rumors album:   Mick Fleetwood, John McVie, Christine Mcvie, Lindsay Buckingham and Stevie Nicks.  They were the ones who slept together, got married, broke up and then slept with other band members while miraculously staying pretty much together for the last 40 years.

But last year, Lindsay was fired from the group.  Stevie had finally said “it’s him or me” and the group chose Stevie.  I don’t blame her.  If I were 70 and incredibly famous and in the Rock and Roll Hall of Fame, I might want to stop having to tour the world with the snarky guy who I broke up with 43 years ago who had repeatedly kicked me onstage and once threw me on top of the hood of a car.

Lindsay was replaced by Mike Campbell from Tom Petty and the Heartbreakers and Neil Finn from Crowded House   Here’s where the story gets good.

Stevie Nicks is my favorite singer in the world and Neil Finn was my big sister Julie’s favorite singer in the world.  (I apologize for telling another “sister dying” story.  I know I tell a lot of stories about my sister dying–you can imagine how fun I am at a dinner party—but this one is a good one.)   Julie adored Crowded House.   She adored them so much the cover of their Together Alone album was used as the cover of the program for her memorial.

When I had arrived back to my home in LA after returning from Julie’s memorial, I went for about a week without turning on the TV or any music.   I barely even ate.   But eventually I couldn’t live on just candy bars from the corner gas station, so I got in my car and headed to Taco Bell.   When I arrived, there was a long line of cars in the drive-thru so finally I looked at the radio, reached over and turned it on.

I got chills    I wasn’t sure, but I thought that maybe it was Crowded House who sang that song.

I rushed home and looked it up on my computer (it was 2008 and I didn’t quite have the technology om my phone yet.)   It was indeed Crowded House. I was sure it was a sign.  I mean, what were the odds that would be the first song I heard when I finally turned on the radio?

And the message?  Don’t Dream It’s Over?   How could I not feel it was Julie telling me that the love we had didn’t end with her death?

Now, ten years later both Stevie and Neil who sang the lead on that song were performing together.   I had read the reviews and knew they sang this very song as a duet.    Again, what were the odds?  My sister had to be behind this.  She must have gotten to know some pretty powerful people in the spirit world to make this happen.  I don’t know if Stevie even knew who Neil Finn was.  There was some petty magical synchronicity happening.

I worked from home the day of the concert so Saul and I wouldn’t be late.  Our dog was walked early, and we headed out at five o’clock on the dot to our wondrous night in Newark, New Jersey.

Three hours and 10 minutes later we had been looking for parking for forty minutes.  Let me explain Newark to you.  It’s the reason all the rest of the entire beautiful state of New Jersey has a bad reputation.  It’s an awful and ugly city made more ugly and awful when every parking lot is full, and you are stuck in traffic with no one directing you ten minutes after a concert is supposed to begin.

Finally, we found a space in a lot about a 20-minute walk form the coliseum.

“I don’t like this spot.”  Saul complained as I put the car in park and started jumping out the door to run to the event.  “It’s too claustrophobic.”

Before I continue, I just want to say that I realize that many of my blogs involve a dispute or argument or out-and-out fight between my husband and me.   I tell Saul he is my muse for the blog.  He says he is fodder for it.

I moved to a new spot that made Saul feel better about his neuroses…I mean…parking claustrophobia, and we ran to the concert.   Magically, we got there at 8:20 just as the first beats of The Chain began.  I told you it was going to be a magical night.    Our seats were far back but straight in front of the stage and the venue is designed well so that we felt pretty close.  To our left was a place for people in wheelchairs to watch, and we loved being near them.

“Did I get us good seats or what?”  I said to Saul proudly.

During the first half of the show we enjoyed ourselves immensely.   Stevie was at the top of her game, and we even liked Mick Fleetwood’s drum solo.   Then Stevie and Neil sang THAT song and it was stunning. I was certain my sister was enjoying this moment right along with me.

But during Landslide things got ugly.

There were two guys and two women probably in their 50’s to the right of us.  They were definitely not part of the nice wheelchair crowd.  I think of them as “old” even though they may have possibly been younger than me.  But they were getting stoned with extremely pungent pot every five or ten minutes and getting really sloppy drunk.  In my opinion, partying too hard or dressing provocatively after the age of forty-five  just makes you look older.

You would think Landslide is not a screaming, staggering-to-the-point-of-almost-falling-over and talking-loudly type of song.   It’s a quiet and contemplative about getting older, being afraid of change, and snow-covered hills. But these people felt differently.    During the quiet guitar solo, they stumbled around in their row and continued to fall on top of Saul.  It was not the peaceful landslide I was hoping for.

I saw Saul who, let’s face it, was there because of me–getting more and more stressed and angry at the people next to him.  I knew that look in his eye.  It was a look you didn’t want to mess with.

By the end of the song Saul was clapping in a dangerously aggressive way in their direction while I was fighting with an usher who would do nothing to stop the drunk people.

I wasn’t sure what us “winning” looked like to him, but to me it looked like us sitting through the rest of the concert in a miserable state or getting ourselves in a huge brawl that landed us permanently in the wheelchair section.

“We’re leaving,” I insisted and started walking to the door.  Saul was wary.  He wasn’t sure if this was some kind of bluff on my part that would land him in hot water later.   And he wasn’t totally wrong to be nervous.  I’ve been known to do things like that.

As we walked the twenty miles to our car,  I was not happy with my husband.  “Why can’t I be married to a man who can sit through an entire concert?” I asked myself.   I couldn’t believe I was leaving the evening I had been so looking forward to.

Saul and I have a rule that we can’t fight in the car.  We fear it will lead to one of us driving over a ravine to “win” the augment.  As you can see, we are all about winning.  It’s the same reason we don’t have a gun or chain saw in the house.    If I were ever president and got the nuclear code, the world would definitely be in danger during one of our marital spats.

We rode silently in the car as I contemplated how unfair my life with Saul  was.   But I also couldn’t help enjoying that we didn’t have to fight crowds to get out of the coliseum or the traffic to get out of the lot.

And all of a sudden, I had compassion for my husband.  He had gone to the concert to support me, but while there, he had reached his limit.   (And don’t tell him but I had reached my limit too.)

What had happened was– I let go of my vision of what the perfect night was supposed to look like.  That rigid desire for what I imagine to be perfection is always what ends up making me unhappy.  When I was younger, I would have insisted we stay to the bitter end of that show no matter how miserable Saul or I had become.   But tonight, I was able to give this “perfect” night up for some peace and quiet and a calm husband.

My big sister would have understood. Julie was always reminding me to be kind to the people I loved. Actually, my big sister might have been hanging out with the people next to us.  She did once get her head stuck in a fence at an outdoor concert.

Saul and I got home and played with our animals, kissed each other goodnight and went to bed.

We had heard the song I wanted to hear, got home at a decent hour,  were thoughtful towards each other and weren’t going to feel bad in the morning.

It turned out to be a perfect night after all–just not what I had dreamed it to be.

ABOUT THE AUTHOR:   KEITH HOFFMAN plans to not have any of his exes on book tours with him after the age of 70.