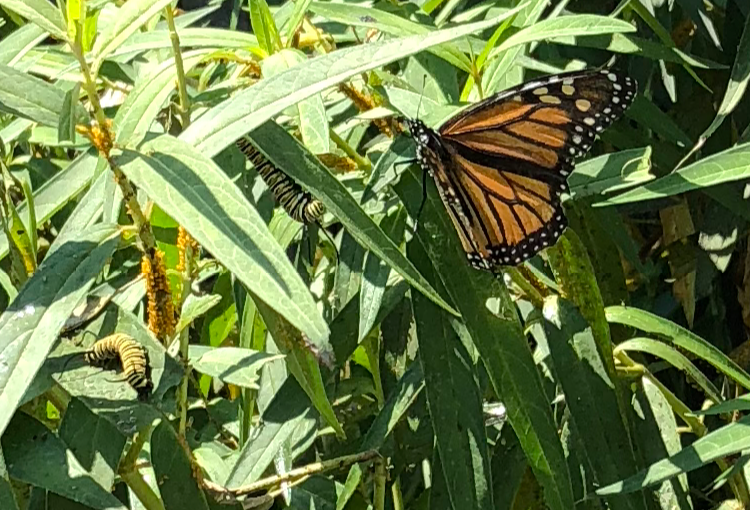 After my husband Saul and I bought a house, we decided to really splurge and have our backyard landscaped.

At first, we were going to splurge and have a screened-in porch built, but after literally months of trying to get a contractor to return our texts, we decided to go with a landscaped yard instead.  We hired a reputable landscaping company and told them money was no object.  When they gave us a quote, we changed our minds and told them money was actually an object and asked them to please cut the estimate in half.  Who needs a log flume in their backyard anyway?

But still, we spent more money than I have ever have spent on anything in my life except the actual house.

We liked our landscaper.  His name is Rob.  He drew up beautiful plans and we were tickled pink with them.   We were going to have a Kentucky Coffee Tree and butterfly plants!  I didn’t actually know what either of these things were, but they sounded exciting and looked good in Rob’s rendering.   When someone at work asked what kind of tree they should plant in their yard, I told them with quite some authority.  “Oh, Kentucky Coffee Trees are the absolute best.”  But really, I was just going off of a sketch.

A few weeks and many thousands of dollars later, our yard was landscaped and it did look beautiful.  I mean, it wasn’t quite like the drawing.  The butterfly plants looked awfully fragile for a backyard with a new puppy, and the Kentucky Coffee tree looked…well…did you ever see A Charlie Brown Christmas?  That Christmas Tree looked positively robust compared to our Kentucky Coffee Tree.    It was scrawny with lots of dead branches.  It was actually so scrawny I think “lots” is an exaggeration as there weren’t many branches on it living or dead.  When a chickadee perched on it the first day I feared for its life as I wasn’t sure the tree could support it.

Our landscaper assured us the tree would grow when we met him at the nursery a few days later.  As he told us this, we couldn’t help but notice we were surrounded by hundreds of lush trees

“Why didn’t you plant one of these other types of trees in our yard instead?” we asked.

“I thought you guys would want something more exotic” he replied.

“Um no,” I thought.   “We wanted something to block the ugly building behind our house.  Something that actually has leaves in the summer.”   But Rob assured me the tree would take root one day.   I just hope I live long enough.

As summer went on and the butterfly plants blossomed, our garden looked quite beautiful especially when bees and monarch butterflies came to visit by the busload.   If you didn’t look up, you barely remembered there were dead branches blowing in the breeze above you.

But a few weeks ago, Saul noticed something red on the butterfly plants.  Was it a fungus?  We looked them up on the internet and discovered to our horror they were aphids.  Red aphids!  And not just a few but I’m pretty sure millions of aphids covering every single plant

Saul valiantly started hacking away at the most infested  but would inadvertently find a stray caterpillar crawling on one of the hack-off branches.  They say that less than 10 percent of these caterpillars will make it to butterfly status, and he didn’t want to kill a single one.  That‘s why I love Saul.  He rescues caterpillars from a pile of hacked-off aphid-infested dead plants.  He doesn’t kill spiders or other bugs either.  Except for mosquitos.  He hates mosquitoes.

Then the next day we discovered little polka dot beetles on the butterfly plants.  They were much cuter than aphids.  Saul did another internet search and found out they were some type of evil beetle that burrows into the roots of and kills butterfly plants.  Now mind you, almost every inch of our yard is covered in these parasite-laden plants under the sickly tree.

Saul sent an angry email to our landscaper.  Saul enjoys being a bad cop.  I’m more of a “the yard is half full of aphids” kind of guy and Saul is more of “our yard is an absolute disaster” person.

Let me give you an example.   We took our dog Alfie to see the ocean for the first time last weekend, and a woman mentioned to us that she heard about a dog that had drank too much ocean water and died.

I wanted to drown her.  You never put a negative idea into my husband’s brain.  It will percolate in there until a catastrophe is fully formed.    The entire way home from the ocean and the entire night he was convinced our dog was dying from drinking too much ocean water.   I tried to comfort and calm him by telling him he was insane and that I couldn’t stand living another day with his negativity but it didn’t seem to  help.

ME:  So…to conclude… this is how I think we can improve or communication and support each other’s growth.  Do you understand what I’m saying?

SAUL:  No, I don’t understand what you are saying and I thought this was going to be a fun walk with no talking.      But..anyway… I hope you feel heard by me.

I didn’t feel heard in that particular moment, but decided not to press the subject.

But then the next day something magical happened.

Saul sent me a picture from the backyard.  Two brand new monarch butterflies were hanging on our back fence waiting for blood to pump in their wing so they could fly for the first time. 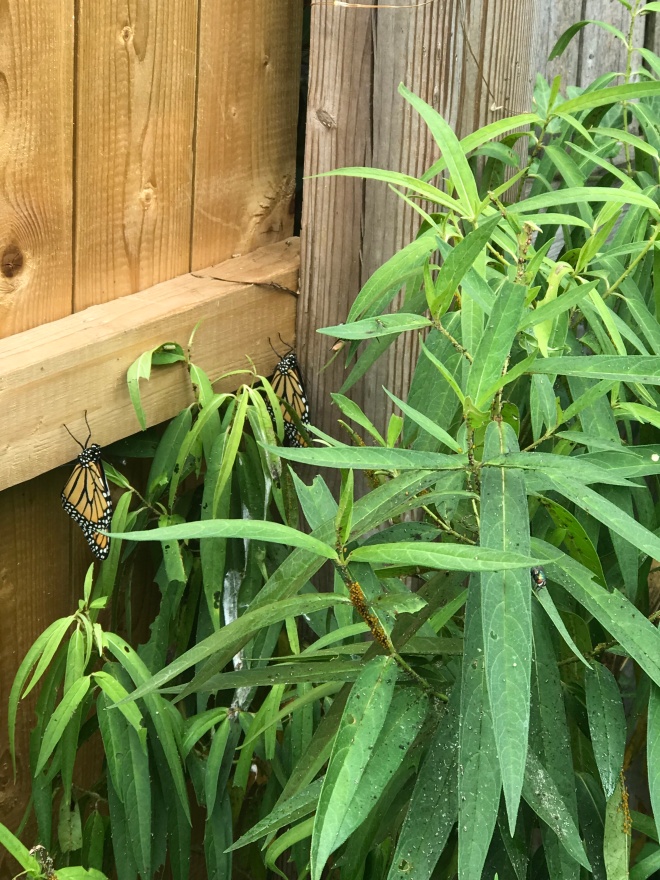 I’ve written about this many times, but when my sister died, Monarch butterflies appeared to me everywhere.  I mean EVERYWHERE.  They even flew alongside my car on the busy 405 expressway in Los Angeles.   They gave me so much meaning and comfort, I eventually had one tattooed on my arm. 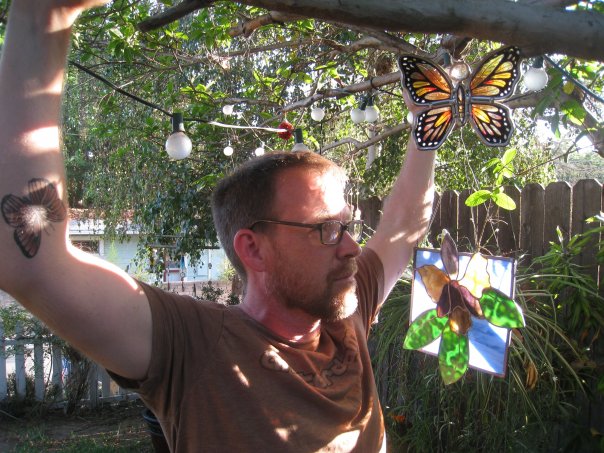 So here we are, our garden full of parasites and dying trees but also full of beautiful butterflies who are on the very edge of extinction and need all the parasite- infested gardens they can get.   I mean, we have a responsibility.  Maybe some of those little guys need to fly somewhere to comfort a newly grieving brother.

I guess life might be boring if gardens were always perfect and oceans were never dangerous and sisters didn’t die and husbands always heard your VERY INSIGHTFUL relationship tips.

Maybe there was a reason Eve ate that apple.  Maybe the Garden of Eden was boring in its perfection.   Maybe she wouldn’t have had time for the serpent if she had been busy trying to get rid of aphids.

If you help a butterfly out of a cocoon, it will surely die because it didn’t go through the struggle and maturation.

Yesterday, I climbed up that fragile little tree and sawed off the all its dead branches.

And I will patently wait for it to take root while the butterflies are learning to fly.

KEITH HOFFMAN is an author who makes aphid jellies and jams in his spare time.